A political tremor brewing in Peru The FARC’s senator 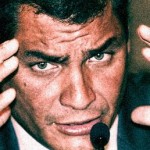 On September 30, something important happened in Ecuador.

A rebellion by police officers took place in protest against cuts in their bonuses and salaries. The discontented police threw tear gas that directly reached President Rafael Correa who was lightly harmed. Correa reacted by inviting protesters to kill him if they so wished but vehemently reaffirmed that he would not back off from his economic measures. Correa was taken to the Police hospital immediately after. Meanwhile, countries in the region, along with the United States and European countries treated these events like a coup d’état. All of them including the U. S Administration expressed full support for President Correa and democracy.

President Correa, a strategic ally of Hugo Chavez, was reported having been kidnapped by the police.  In fact, he was given a room where he was well taken care of and where he received cabinet members, Congressmen, journalists, and Venezuelan advisors.  It was from the hospital that Correa declared a state of emergency, mobilized the military, and called regional and world leaders to complain about the coup d’état. It was also in his hospital bed that he took control of radio and TV stations, where only pro-government broadcasters were permitted to speak, while others were not allowed to do so. The government called on the population to mobilize in order to free the president and fight against those who were trying to overthrow him.  Finally, President Correa was “rescued” by the military and “freed” back to the palace of government.

For those regional and world countries that know well that coup d’états are unacceptable their reaction seemed natural. There was no question that defending democracy must and should be the priority.  However, the question is whether Ecuador under Correa’s leadership is still a full fledged democracy.  As was the case with (Manuel) Zelaya’s Honduras fifteen months earlier, the case of Correa is another example of perverted democracy that the world often tends to ignore, intentionally or unintentionally.

Indeed, shortly before the police rebellion the Ecuadorian Congress passed a set of social laws after reaching a consensus that included a dialogue with different social and political sectors. These laws did not satisfy everybody but were understood to be balanced, and, more importantly, the result of fair negotiation and compromise. However, the President chose to veto many of these laws despite the fact that his own party was part of the discussion. The Ecuadorian Congress (or assembly) remained impotent in the face of presidential aggressiveness. The President threatened to dissolve congress in case there was any opposition. In light of these events, street protests increased among students, public servants, retirees and indigenous populations.

The largest indigenous organization Confederacion de Nacionalidades Indigenas del Ecuador (CONAEI), – one of the most important bastions of support for Correa during  the 2006 Presidential elections- issued a statement on October 6th. In that statement, CONAEI claimed that “there was never a coup d’état nor had the president been kidnapped but there was a “legitimate expression of discontent with the Correa government”. CONAEI called the Correa government a “dictatorial democracy” for restricting freedom of the press, for taking control of the legislative and judicial branches of government, and for eliminating all possibility of discussion of “laws proposed by the indigenous movement and other social sectors”. The statement by CONAEI, that has had a tense relation with Correa over mining, environmental and other policies in the last two years , is a good illustration of the way the Ecuadorian president has conducted the business of government.

In 2008, the Ecuadorian constitution was approved and ratified. That constitution provides significant prerogatives to the state.  The state is responsible not merely for guaranteeing or expanding liberties and rights. The Ecuadorian constitution empowers the state as the guarantor of education, health care, food, social security, and water resources for its inhabitants. The state is also in charge of national planning, eradication of poverty, and making sure that national wealth is distributed in an even manner among its citizens. By the same token, the constitution talks about re-orienting the private sector, also called the strategic sector, to serve “the social interest.”

Likewise, the constitution provides for the dissolution of Congress while calling for new elections. It allows the president to exercise executive prerogatives by ruling by decree. In addition, the constitution establishes that legislative ability to act against the president is limited in so far as it depends on the approval of a “constitutional court”. The court at the same time is likely to be highly influenced by the president. In other words, the Ecuadorian constitution,-whose enactment and ratification was praised by the contentious Secretary General of the Organization of American States, Jose Miguel Insulza- is a document that empowers the government  against  democracy, individual rights  and private property.

The police uprising against Correa’s government is not merely the result of an economic policy of austerity. It is the very implementation of the spirit of Chavez-type authoritarianism and contempt for Congress and democratic procedures what brought about the shaking of Correa’s government on September 30th. This was accompanied by three years of systematic attacks against the press and furious intolerance against opponents.

Correa pointed out during the rebellion that his government will proceed with its policies, regardless of the protests. Correa also attributed the rebellion to a plot inspired by his political opponent, former president, Lucio Gutierrez.   He made people believe that he was another Yeltsin, heroically confronting a gang of reactionary armed plotters.

But Correa paid a heavy price: His government was saved by the chief of staff of the Ecuadorian army, Ernesto Gutierrez, who also demanded that the president change the public sector law that generated the protest. Correa began to back off from his authoritarian policies, not like a hero but very much like a coward.

What is pathetic about this episode is that the military had to restore the political order in exchange for presidential concessions that could have taken place reasonably (as it initially did) in the legislative democratic process. What this shows is that the risk of military political empowerment is higher when democracy is not properly respected.

Yet, countries of the region recognize a coup as the only way in which democracy breaks down.  Undemocratic practices performed by elected governments are not acknowledged. This is why the OAS, under the pitiful leadership of Mr. Insulza, remained paralyzed and impotent after the Inter- American Human Rights commission (an arm of the OAS) published late in 2009 a comprehensive report on Venezuela’s violations of human rights and democracy.

The events of September 30th add to the need for the United States and Latin American countries to reconsider upgrading the criteria by which democracy is judged.