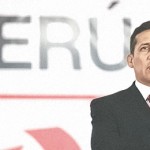 On June 5th, a second round of elections will decide who the next president of Peru is going to be.  The April 10th general election failed to produce a candidate with more than 50% majority. The competition is now between Keiko Fujimori and, Ollanta Humala.

Keiko Fujimori is the daughter of former President Alberto Fujimori. The former president is now serving a 25-year jail sentence for his connections to the activities of an army death squad. Fujimori also dissolved the Peruvian Congress in 1992, which was then controlled by the opposition parties. This self-coup strengthened the powers of the executive branch by providing it with legislative powers and enabled Fujimori to carry out an agenda without congressional opposition.

Keiko Fujimori has tried to distance herself from her father, pledging not to pardon him and she even went as far as asking for forgiveness for her father’s crimes.

Mr. Humala has a record that is no less problematic. He is the founder of a new movement called etno-cacerista. The etno-cacerista movement is ultra-nationalist and demands the rule of Indians over a vast territory. They oppose foreign investment and talk about creating an alliance with Bolivia and Ecuador called the Tahuantinsuyo Axis. The object of this axis, whose name Tahuantinsuyo refers to the four states of the Inca Empire, is to create one territory based on the Inca nation on what is today Peru, Bolivia, Ecuador, the Northern part of Argentina and parts of Chile, as well. Humala, appeals to the poor urban sectors and to the rural peasants. He counts on the support of the military that he views, like Chavez, as the backbone of his revolutionary movement and proposes a constitutional assembly following the Venezuelan blueprint. In July 2007, Humala organized violent, massive protests that took place in different regions of Peru. Soon the demonstration spread, the number of strikers increased and violence intensified. In the Southern region of Puno, airports and train stations were stormed, eggs and tomatoes were thrown on President Alan Garcia’s supporters, and angry demonstrators held several police officers hostage. Humala suddenly appeared on the public scene calling for the resignation of President Garcia. It was also reported that Humala received $600,000 monthly from Hugo Chavez to promote social unrest in the country.

Humala has distanced himself from Chavez during the electoral campaign and presented an image of a social democrat and not a revolutionary.

Current polls show that for the runoff Humala has an advantage over Fujimori. Humala has 42% of the votes according to the polls while Fujimori 36%.

When those who support Humalla were asked why they do so, their answer was first because he represents change (52%), he will bring order (38%), he is new to government (38%), he will help the poor (26%) , and because he will change the economic model (24%).

Interestingly enough, those who support Keiko will do so because they identify her with what they consider the good part of her father. Those who support Humala are looking for some sort of change and for something new. Of course, the Peruvian phenomenon is no different than what has happened in some other countries in Latin America where there is lack of confidence in elected officials, a disconnection between them and civil society and a large number of unresolved social issues.

Humala’s ominous ideological background and actions have been miraculously hidden. This is not helped by the reports that indicate some sort of pact between former President and presidential candidate, Alejandro Toledo and Humala. Mario Vargas Llosa, a man who has opposed Chavez and his revolution stated publicly his preference for Humala. The reason Vargas Llosa did it is because of his personal hatred for former President Fujimori, who, among other things, killed Vargas  Llosa’s       chances of becoming president of Peru in 1990. In his endorsement of Humala, Vargas LLosa pointed out that any problems that might come along with Humala, we will face when it comes.”

Perhaps this writer who has been so opinionated on so many matters ignores that those who claimed in electoral campaigns that they were not who they were suspected to be turned into what they really were suspected to be. The most vivid example is Daniel Ortega of Nicaragua who in his 2006 campaign repeated that he is not the same person he was. Ortega is now one of the most dangerous anti-democratic leaders in Latin America and a fervent ally of Hugo Chavez.

Keiko Fujimori, has the burden of her father. Humala has the burden of himself. He is a man who not only developed a systematic racial and revolutionary ideology. He also participated in violent and seditious activities. Humala will establish an alliance with Chavez, will revive the Maoist group าShinning Pathำ, will poison the air with anti-American rhetoric and will end the fight against drug trafficking activities which in Peru are monstrously increasing. Humala will be a stubborn and dangerous dictator.  We urge the Peruvian people to reject Humala at the ballots on June 5th.