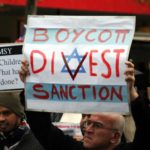 Calls on Congress to combat anti-Semitism and racism are well-taken. The massacre at the Pittsburgh Tree of Life Synagogue where 12 congregants were murdered at the hands of a Neo-Nazi white supremacist was a horrific act of evil. Though still on the fringe of society, members of white supremacist groups pose a significant danger to blacks and to Jews.

However, there is the Boycott, Divestment and Sanctions (BDS) movement which targets Israel as an illegitimate state. Many see this movement as being fundamentally anti-Semitic since Israel is the nation-state of the Jewish people. Of concern now is that two supporters of the BDS movement have been elected to Congress.

Although these victories are minimal in comparison to the number of seats there are in Congress and even in comparison with the amount of seats the Democratic Party holds, this nonetheless encourages the BDS movement to stay its course.

It is important to understand that BDS operates on a strategy that follows the ideas of early 20thcentury Italian Marxist Antonio Gramsci. Gramsci argued that the dominant capitalistic class does not only dominate through economic means but also through cultural domination. This cultural domination takes place in society through a consensus of values, norms, and beliefs that are widely accepted including by those who are victims of this domination. In other words, the dominated believe in the values of the dominant.  Thus, the media, universities, religious institutions, the school system and other spheres of the system reproduce this set of values and beliefs and individuals “buy into them”. Gramsci proposed a strategy to combat this type of sophisticated domination. The idea was to create a counter-hegemony. The strategy was to begin to advance alternative ideas that could affect the mindset, values and beliefs of society so as to adapt them to a possibility of change.

The idea was to define a new normal and a new concept of what is legitimate in order to seek gradual changes that would eventually lead to total change.

As an example, before the Muslim Brotherhood took over the reins of power in Egypt, it managed to gain control of the trade unions, student unions, professional associations, the educational system and certainly the mosques.  Later they won seats in parliament and eventually the presidency of Egypt.

Although more limited in scope, the method used by BDS is similar. Islamization in the secular and Christian West is not a realistic goal in the short run. However, the de-legitimization of Israel and the breakdown of pro-Israel sentiments in American public opinion is viewed as an attainable goal.

BDS is not the work of one man or one organization. BDS is a coalition of groups that include well-funded Muslim organizations (mostly with ties to the Muslim Brotherhood) such as the Council on American Islamic Relations (CAIR) and others, Palestinian student organizations, anti-Israel Jewish groups and individuals, and left-wing students and academics. (To clarify, I make a distinction between Muslim Americans and organizations such as CAIR. Muslim Americans, as a community, are not part of this movement. Muslim Americans constitute a complex and diverse community and for many of them the Israeli/Palestinian conflict does not mean much).

The strategy of the de-legitimization of Israel is possible through a combination of two elements. First, the openness of the left to these ideas. Second, and as a direct consequence of the first, is BDS’s skillful use of intersectionality.

To be sure, the Soviet influence on the Western intellectual left from the cold war era denoted a predisposition by elements of the left to adopt anti-Zionist views. The logic was simple: the USSR and the communist/socialist idea stand with the oppressed and against imperialism. Israel oppresses the Palestinians and stands with America. Therefore, all those who represent oppressed people should stand against Zionism and Israel.

The Arab oil embargo of the 1970’s added fuel to this idea. The 1975 resolution, “Zionism is Racism,” as absurd as it sounded, made inroads in many elements of the left. That was aggravated by the Israeli/Palestinian conflict where Palestinians were succeeding in portraying themselves as victims rather than perpetrators despite the fact that they were responsible for multiple terrorist attacks and despite the Palestinian leadership’s rejection of any compromise with Israel. The first Israel-PLO war on Lebanese soil (1982) and the first intifada (1987-1993) reinforced that image of David vs. Goliath, where Israel was the latter.

The idea of intersectionality stands on similar ground: different forms of discrimination and oppression “combine, overlap, or intersect”. Thus, oppression of or discrimination against women, African-Americans and other minorities, homosexuals, immigrants, and others are all part of the same scheme. Therefore, the fight against the oppression of the Palestinians is an integral part of the oppression of the groups mentioned above. Thus, a rabid pro-BDS, anti-Israel supporter such as Linda Sarsour becomes a leader of the Women’s March when her main agenda is the de-legitimization of Israel. Sarsour could not fake it any longer when she began associating with homophobic and anti-Semitic personalities such as Louis Farrakhan and Imam Siraj Wahhaj.

By the same token, BDS also made alliances with Immigration coalitions and with movements such as Black Lives Matter. The latter is a movement that emerged as a response to police killing of black people and racial profiling. BDS, through one of its organizations, Jewish Voice for Peace, created a website called “Deadly Exchange.” That website includes an entire pamphlet directed at Black Lives Matter where they try to prove in a document full of distortions that the “exchange programs that bring together police, ICE, border patrol, and FBI from the U.S. with soldiers, police, border agents, etc.” to Israel, “promote and extend discriminatory and repressive policing practices that already exist in both countries, including extrajudicial executions, shoot-to-kill policies, police murders, racial profiling, massive spying and surveillance, deportation and detention, and attacks on human rights defenders.”

The pamphlet resorts to anti-Semitic rhetoric by claiming that those who are promoting these programs are “the neo-conservative Jewish Institute on National Security of America (JINSA), Jewish Federations, the Anti-Defamation League, and even Birthright.” In other words, Jewish institutions with different views, whether they are right, left or center are all without exception systematically promoting violence against black people. Black Lives Matter adopted a statement repudiating these exchanges despite the fact they have been purely professional, as many black officers who participated in these exchanges testified. BDS scored a victory when the city of Durham in North Carolina prohibited police officers from participating in those exchanges.

Mainline protestant Churches adopted harsh resolutions and some of their religious leadership defined the Israeli occupation of the West Bank as a “sin against God,” misappropriating a term used by Pope John Paul II to describe the Holocaust.

Victories of this type are not only based on distortions but are blood libels that are too often accepted as unquestionable truths. Thus, it is in academia where this point is best proven. Professors who are supposed to have an open mind and critical judgement have too often joined the boycott of Israel. Likewise, academic associations adopted resolutions condemning Israel.

Thus, BDS aims at creating a counter-hegemony to force changes in mindset by conquering key cultural and ideological positions in the university, the churches, the black community, the artistic community, some trade unions, liberal causes and other civil society entities. BDS is not just about economic boycotts. They are well aware that a thriving economy such as Israel’s is not going to be sabotaged so easily.

Passing anti-Israel resolutions in different academic entities is not always successful. So Why bother? The answer is that the more the idea that Israel is an illegitimate entity based on “land theft” and oppression of the Palestinian people is heard and the more the idea of the “horrors” of the occupation makes its way into people’s minds, the more the Zionist narrative breaks down. Although BDS has not succeeded in exercising substantial pressure on Israel or its supporters, it has created significant doubt about the purity and justice of the state of Israel. When the only Jewish state is coming under such attack and the fact being that Israel was created to protect Jews from anti-Semitism, an attack against the very foundation of Israel is an attack on the Jewish community, which generally supports the existence of the State of Israel.

In addition, last summer it was reported that the Virginia-based U.S. Campaign for Palestinian Rights, which oversees the work of 329 different BDS organizations, funnels money to the Palestinian BDS National Committee (BNC). This committee is based in the West Bank and Gaza and one of its members is the Council of National and Islamic Forces in Palestine, which includes Hamas, Palestinian Islamic Jihad and the Popular Front for the Liberation of Palestine. All of these entities are designated terrorist groups by Israel, the U.S. and Europe. In fact, this requires an FBI investigation as to how donations made in the U.S. are being spent since American charities are not allowed to benefit terrorist groups.

The election of Ilhan Ohmar and Rashida Tlaib to Congress is the last major victory of BDS in its hegemonic ambition. Omar called Israel “evil” although she said nothing about the cruelty of the Assad regime in Syria that claimed the lives of 500,000 people or the violence in Yemen where Arabs kill Arabs and Muslims kill Muslims. Likewise, except for one insignificant tweet, she never acted to help prevent the genocide perpetrated against Rohingya Muslims in Myanmar or raised an issue about children starving in Yemen as a result of a war between two Muslim groups and countries. Tlaib-who like Omar remained silent on Syria, Myanmar, Yemen and other cases-expressed her support for a one-state solution and cutting off military aid to Israel. The one-state solution is an idea that from a Palestinian point of view would merge Israel with the West Bank and Gaza with the objective of destroying the Jewish character of Israel by overpowering its Jewish majority.

Ron Klein, chairman of the Jewish Democratic Council of America, called the problem raised by these two new congresswomen a matter of “policy disagreement” and failed to acknowledge the extremism of their anti-Israel positions. Policy disagreements exist within a certain consensus, not when one side seeks to destroy the other. It is the obligation of the Democratic Party to vehemently reject these two Congresswomen’s positions on Israel.

However, pushing back against extremism and anti-Semitism is also the obligation of both parties in Congress, the president and every sector of civil society.