Clare Lopez: Chaos in Venezuela Venezuela: A New Russian Outpost in the Americas? 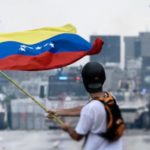 By Secure Freedom Minute by Frank Gaffney On January 24, 2019

Finally, something is being done about the nightmare that has befallen Venezuela, thanks to years of socialist misrule there that has turned one of the world’s richest nations into an economic basket case, a humanitarian disaster and a geopolitical time-bomb.

Yesterday, Juan Guaido, the leader of Venezuela’s National Assembly, took the extraordinary step of swearing himself in as the Interim President of Venezuela. This desperate – but constitutional – move is aimed at ending the bankrupting chaos that is the legacy of long-time communist dictator, Hugo Chavez, and his corrupt and incompetent hand-picked successor, Nicholas Maduro.

President Trump promptly joined other regional and world leaders in recognizing Mr. Guaido as his country’s legitimate president.  This is a necessary but insufficient step.  They must now take measures to help protect him and the chance to save Venezuela that his courage is making possible.