The Venezuelan Crisis: Supporting a Transition From Dictatorship to Democracy Frank Gaffney Discusses the Situation in Venezuela 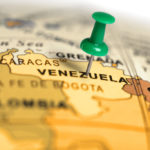