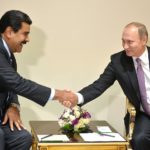 The Administration should consider a naval and aerial blockade of Venezuela to prevent Russian, Iranian and Chinese control of the country

The power of the international community to fight for democracy and against security threats is being tested in the case of Venezuela. Despite sanctions and an important U.S.-led international coalition that includes the Organization of American States (OAS) and the European Union (EU), the government of Nicolas Maduro is determined to stay in power without offering anything in return.

Maduro has appealed to his allies to help protect his troubled government, particularly Russia, Iran and China.

It was reported by U.S. military sources that on March 24, 100 Russian military personnel and about 35 tons of military equipment arrived in Venezuela. The military analysts rightly observed that such a Russian deployment is very similar to the one Russia displayed to save another ally in despair from a popular uprising: Bashar al-Assad of Syria. Russia has viewed Venezuela for a long time as a global strategic ally in what the Putin regime sees as a global chess game whose main adversary is the United States.

Currently, Russia is well positioned in Syria and Assad totally depends on Russia for its survival. Israel is an American ally but even Israel resorts to Russia in the current circumstances. Last week, the body of an Israeli soldier missing in Syria since 1982 was returned to Israel thanks to Russian intervention. This act angered the Syrians and the Iranians and this shows to what extent Russia has consolidated its power and influence in an area Russia was believed to have been removed from a long time ago. Israel also negotiates with Russia to secure her support. The Russians were smart enough to support Israel’s security needs by allowing Israel to prevent Iran from consolidating its presence in Syria and also prevent the arming of Hezbollah. Russia is smart enough to be on good terms with Israel. As a result, Russia’s power is effectively growing in the area.

Russia’s assertive defense of a dangerous dictator in the heart of the Western Hemisphere seems to repeat the case of Syria: that is, the regime will be saved at any cost and in turn will help a repressive set of regional regimes to survive.

As the White House rightly pointed out, commercial needs don’t justify those flights. This means that those flights may well carry members of the recently sanctioned Iranian Revolutionary Guards or Hezbollah fighters armed with weapons. Taking into account the fact that Iran and its proxy terrorist groups are involved in a large number of Middle East countries (including Syria, Lebanon, Iraq, and Yemen), such intervention shows how important Maduro’s survival is to the Islamic Republic. The money generated by the drug business has provided a financial boost to Iran and to their proxies’ subversive activities in the Middle East. Iran does not want to lose Venezuela which is a major narco-trafficking state and enabler of Iranian narco-activities. This is why Iran may be willing to deploy more of its fighters in Venezuela despite the fact that they are already spread thin in various countries of the Middle East.

And then we have China. According to Admiral Craig Faller, China began a sophisticated disinformation campaign blaming the United States for recent blackouts which had devastating effects on the Venezuelan people and their economy. China had provided Venezuela with more than $30 billion in loans. If the Chinese were only seeking payback of the Venezuelan debt, they would not care whether the president is Juan Guaido or Nicolas Maduro. However, China’s preference for Maduro is clearly motivated by strategic considerations aimed at counteracting U.S. power in the region. The fact is that the Chinese government has also provided military supplies and personnel to Venezuela in support of the government.

Maduro’s talk about being willing to negotiate is nothing but a ploy to buy time while Russia, China and Iran try to secure his power. Nobody should be fooled about his motives.

The permanence of the Maduro regime is a geopolitical challenge for the U.S. A recent decision to sanction shipping companies that transport oil to Cuba is a good measure. Sanctions need to be increased more and more. But that may not be enough. Russia, China and Iran must get out of the Western hemisphere. Their presence further weakens and endangers the region.

What is worse is that the action of these three powers may lead the United States into something so far avoided: a military intervention.

In order to avoid a military confrontation, we need to adopt a policy of naval blockade which I suggested in a recent article.  Most recently, Jed Babbin, the  former undersecretary of Defense under President George H. W. Bush went a step further. In Babbin’s own words: “The last time we enforced the Monroe Doctrine was in 1962 when the Soviet Union put nuclear-capable missiles in Cuba. The resulting Cuban Missile Crisis brought us closer to nuclear war than we had ever been, but the Soviets backed down. The Russian-Iranian effort to establish themselves in Venezuela is no less than a violation of the Monroe Doctrine…[Trump] can, for example order an air and sea blockade of Venezuela to prevent Russia and Iran from building their power there…. Time is not on our side. The longer we wait to take decisive action against Russia and Iran, the harder it will be to force them out of Venezuela. And forcing them out is, regrettably, our only option.”

Indeed, an aerial and naval blockade would serve to mitigate the presence of these three countries mentioned . No flights and no shipping in and out of Venezuela. The Monroe Doctrine—that early in the 19th century declared Latin America a sphere of American influence—is not a reflection of U.S. imperialist ambition. It is now a national and regional security imperative.