Application of the Monroe Doctrine is a National and Regional Security Necessity May Day, May Day for Communist Venezuela 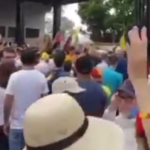 Venezuelans should mobilize their ‘people power’ to neutralize regime targets

The peaceful phase of Venezuela’s citizen-based fight for constitutional government has run out of time.

With visible but subdued divisions in the regular armed forces, the Nicolas Maduro dictatorship has rallied the dregs of its kleptocracy to use intimidation and force – and a formidable Cuban-built secret police system – to keep control or go down fighting.

The interim government of Juan Guaido has done a courageous job of rallying citizens into the streets as it built international diplomatic support and sought humanitarian and economic assistance. It has struggled to drive wedges into the military and peel elements away from the Maduro regime, but with few effective results.

This article, written as a paper for Guaido’s team in January and updated from an article written for (but rejected by) Foreign Affairs in February, shows the plan to mobilize “people power” against regime targets.

Go after the regime’s nerve center

Guaido and his movement can recover the time they lost after failing to channel their formidable mass of “people power” to take on the greater foundations of the regime: the notorious SEBIN secret police, military counterintelligence, and the regimented, red-shirted mobs called colectivos.

SEBIN and military counterintelligence are the nervous system of the Maduro regime. Neutralizing one of them is vital. Under the right leadership, an element of the Venezuelan military can quarantine the counterintelligence apparat. Taking on SEBIN, a Cuban-built version of the old Soviet KGB, has been the most urgent task since Day One, but has escaped unscathed.

SEBIN’s survival, in any form, will be fatal to Venezuela’s recovery. There is still a window in time to take it down.

While there may have been sound plans behind approaching the military and regular police with offers of amnesty, the same could never be said about SEBIN and its Cuban overlords.

To the average Venezuelan, standing up to SEBIN would seem like a hopeless death wish.

History shows otherwise. People power has overcome totalitarian regimes before. It took down the Berlin Wall thirty years ago. It ousted Communist rule from Poland to Vladivostok.

‘People Power’ fails when it doesn’t challenge the secret police

Only where people power failed to confront and uproot the secret police – Russia and Nicaragua in particular – did old instruments of force reassert themselves and wreck democratic gains. In Russia, preservation of the old KGB, albeit re-structured and re-named, wrecked the democratic experiment and enabled the rise of Vladimir Putin.

Guaido has inspired millions to take to the streets nationwide, not only in the large cities, but in smaller, more isolated towns that have seldom seen political protest. Until Operación Libertad today, the mobilizations have been peaceful. The security forces, with some tragic exceptions, have been surprisingly restrained until today. (Today’s surprise release of political prisoner Leopoldo Lopez, with apparent SEBIN support, is a suspicious move, indicating a possible palace coup against Maduro to preserve the narcoregime itself. More on that later.)

The regime’s state of surprise, shock, and confusion that paralyzed decisive action quickly wore off despite internal divisions, international isolation, and economic collapse. Maduro’s massive praetorian guard of Cuban personnel, and his fanatical army of colectivo red-shirts, saw that the civil protests presented no danger.

Public enthusiasm in any citizen protest movement needs visible momentum to keep it fueled. The constitutional government of Guaido lost the element of civic shock and awe, and regime elements predictably dug in their heels. Over the weekend of February 5-6, 2019, Maduro decreed a merger of the colectivos into the regular armed forces.

The out-of-shape colectivos perform the lowlife duties of the regime: taking to the streets to harass and threaten, and thug action too unbecoming for a professional soldier or police officer.

So what could Guaido and the Venezuelan constitutional movement do? First, if they can’t persuade the armed forces to muster the courage, they must seize control of the SEBIN secret police. The people, by their sheer numbers, can overwhelm SEBIN and shut it down. Whether through private initiative or, even better, being deputized by the interim government, citizens can take action. But this recommendation is now months old, and time could be running out.

First, the legitimate Guaido government had been urged to create an immediate legal basis for citizen action. It was urged to issue an ad hoc legal order for SEBIN personnel to stand down all activity, preserve all paper and digital records, surrender their phones and other electronic devices, disarm themselves, and remain in their homes until further notice. It was urged to declare that SEBIN is a foreign-imposed instrument of repression and organized crime, and that any collaboration with SEBIN is henceforth a crime. Of course, SEBIN was unlikely to comply, but the orders would have created the legal basis for citizen action.

Second, the constitutional government could have issued a call for citizen action against SEBIN. It still can. Whether a general call for protesters to organize themselves at their own initiative, or formal mass deputization of protest leaders in every city, precinct, and town, this call would have provided the authority and basic command structure for coordinated citizen action.

Even without orders from a disorganized Guaido government, ordinary citizens can still put their massive numbers to work: (1) under the cover of the crowds, cut off water, electricity, and generator fuel at SEBIN’s central headquarters and at its local offices in every city and town; (2) disable hard-wired and wireless communications serving SEBIN posts; (3) block traffic entering and exiting SEBIN facilities; (4) detain all SEBIN and Cuban personnel and their vehicles, confiscate and safeguard their personal phones and other electronic devices; (5) keep all detainees under strict guard and in humane conditions until official authorities can sort things out later; (6) take over SEBIN facilities and lock them down. All SEBIN records must be secured for use in future investigations and trials, and for proper treatment of informant files and the dossiers on citizens.

As noted in January, the regime is unlikely to respond passively to direct citizen attacks on its nerve center. To some degree, it did call out the colectivo mobs, police, national guard, and army to respond with lethal force.

By isolating SEBIN as the only target, pulling out the regime’s eyes and ears, and neutralizing SEBIN’s control over the rest of the apparat, such force may still be restricted to the colectivos themselves. Citizen appeals to the conflicted police and armed forces can induce the uniformed professionals to bring the colectivos into line.

History shows that the recovery of countries from decades of dictatorship has depended on citizen action – not against the armed forces or uniformed police, but against the secret police.

SEBIN and the Cuban security personnel should be the main targets of Venezuelan people power.

Juan Guaido has one last chance. With properly mobilized people power, it’s now time to use it or lose it.