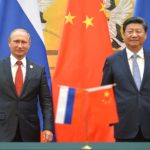 The U.S. Should Keep American Companies’ Assets & Presence in Venezuela

In my latest article, I pointed out that as the United States withdraws from the world and international affairs, China and Russia step in, to the detriment of U.S. interests. I noted that withdrawal from world affairs could affect not only our interests but also our own national security.

Venezuela, Cuba, Nicaragua and Bolivia are the remnants of the ALBA coalition. At one point, they enjoyed wide support in Latin America, but that time has passed.

The ALBA coalition is deeply anti-American and has alliances with drug traffickers and subversive groups such as the FARC and Hezbollah. The United States is now applying strong sanctions on Venezuela in an effort to bring the Venezuelan regime down.

However, China and Russia (particularly Russia) have a major interest in keeping the Maduro regime alive. It is a way to occupy a space at the heart of the United States’ neighborhood and would allow them to enjoy a geo-strategic advantage in the Western hemisphere. Russia will always support the Venezuelan and Cuban regimes, and any other anti-American regime such as Nicaragua or Bolivia.

China has similar objectives. China’s presence is less focused on military, rather it aims at increasing its economic prowess and amassing the key natural resources it needs to satisfy domestic demand. This point is crucial.

As part of a U.S. sanctions policy towards Venezuela, there are several U.S. companies whose license to operate in Venezuela has been temporarily extended until January. These companies include Chevron, Halliburton, Schluberger, Baker Hughes, and Weatherford.

These companies have already suffered the weight of the sanctions by losing money, however, they maintain a 100-year-old infrastructure in Venezuela. If these companies lose their licenses, it is expected that Chinese and Russian oil producers and their more than 600 service companies would take over American operations and assets. Russia’s Rosneft is already cooperating with China National Petroleum Corporation and, through different companies, it is controlling the import-export of Venezuelan oil including shipping oil to China.  In addition, it has been widely reported that Chinese and Russian companies already have the technology that allows them to extract and transport heavy crude.  Therefore, a potential takeover of U.S. operations could be fairly swift.

Such a situation would not only save the murderous regime of Nicolas Maduro but would also perpetuate the Chinese and Russian presence with increased oil production levels, which implies more money to Maduro’s coffers.

In other words, the non-renewal of the General License 8D for U.S. companies would remove the last bastion of American influence in Venezuela. In that case, the U.S. would effectively be displaced from the area.

Currently, U.S. enemies including Iran and Venezuela, let alone Russia and China, are emboldened to intervene in Latin America.

The U.S. must halt their expansion. Extending the license to U.S. companies constitutes a small but important step to do so. It is important to point out that Iranian oil companies are also operating in Venezuela. The National Iranian Oil Company has established an office in the country. Iran has 600,000 acres of oil fields, mostly in the Orinoco Belt, with 2 billion barrels of proven production reserves. Iran can easily join forces with China and Russia against the United States.

Meanwhile, the U.S. must do everything in its power to remove Maduro and install a new temporary government led by Juan Guaido. Once a new government takes over, American companies can operate normally, and the Russians and Chinese can effectively be displaced.