The U.S. Should Keep American Companies’ Assets & Presence in Venezuela The Crisis in Chile: What is Happening? 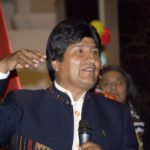 Cocaine traffickers and Communists denounce Bolivia’s constitutional restoration as a coup while citizens take their country back.

The incumbent Evo Morales, in power for 14 years, provoked the crisis after ignoring a national plebiscite against his bid for a third term or lifetime rule. A fraudulent election October 20 united Bolivians in massive nationwide protests against the pro-Cuba president, building to a crescendo that forced Morales to resign on November 10.

Not only Morales quit. His vice president, ministers, legislative leaders, and other loyalists – the entire constitutional line of succession – also resigned with no replacement. That left Bolivia with no political leadership at all.

With the military and police maintaining public order against Morales-inspired mob violence, the top opposition senator found herself under the constitution to be the new president.

Senator Jeanine Añez, with a vacuum civilian authority above her and nobody to swear her in, stepped forward for her role. The senate vice president could have serve the rest of Morales’ fraudulent five-year term. Instead she called for new elections. “May God bless you and allow us to be free and hold transparent elections soon,” she tweeted to Bolivia’s young people.

Morales, flown out by the Mexican Air Force, denounced the transition as a “right-wing” coup. So did his sympathizers, ranging from the Cuban government to Vladimir Putin’s “Sputnik” propaganda outlet, to most of the mainstream media.

As the votes were counted it looked like Morales didn’t have enough votes to prevent a runoff, so he shut down the counting. His counters declared him the winner. That sparked mass protests that denounced the elections as fraudulent.

A report issued by the Organization of American States (OAS) declared that the recent Bolivian elections couldn’t be validated because of the irregularities that were found in the process. The OAS urged to change the Electoral Court and called for new elections to take place. Morales then  declared that a new round of elections will take place. The attorney general announced a judicial investigation against members of the high electoral court. The people having lost all confidence in Mr. Morales intensified their demand that Morales and his government resign. They were not going to fall again in that trap.

The commander of the Armed Forces William Kaliman suggested – did not demand – the resignation of the president in order to reestablish order in the country. This has been grossly misinterpreted by certain people in Bolivia and outside it (e.g. Labor Party leader Jeremy Corbyn in Great Britain, Alberto Fernandez in Argentina, former Brazilian president Lula Da Silva and Minnesota U.S Rep Ilhan Omar in the United States).  Likewise, Kaliman called on the population to abstain from acts of violence

Since Friday there have been police riots in rebellion against Morales’ fraud. The military refused to repress these riots and Morales found himself cornered and alone. Before Morales resigned his vice president and chief ideologue Alvaro Garcia Linera, his Minister of Mining, the president of the high electoral court and the speaker of the House of Representatives had already resigned. Governors and Mayors from Morales’ party had also resigned.

The Bolivian Workers’ Organization (COB), the largest trade union in the country and an ally of Mr. Morales also requested the resignation of Morales in order to bring about peace and order. COB declared that the organization does not wish to be associated with a national bloodshed. They supported the OAS’s call to change the Electoral Court and called for new elections.

The difference between Bolivia and Venezuela

The differences between Bolivia and Venezuela are important to understand. In Bolivia there was a well-organized opposition led by Luis Fernando Camacho, a leader of one the richest business associations in the country. However, the discontent went beyond Camacho’s province of Santa Cruz. He mobilized the masses and refused to give up. Until the appearance of Juan Guaido, the opposition had no leader capable of unifying. Likewise, the political opposition, contrary to Venezuela, did not rush to recognize fraudulent results as Henrique Capriles Radonski did in Venezuela on several occasions.

In Bolivia, like in Venezuela, Morales tried to co-opt the military and the police to support his regime. Morales sought to transform the military by creating new training and anti-imperialist indoctrination. At the same time, like in Venezuela, Morales gave benefits to the military in terms of salaries and also roles in the state apparatus. The military indeed was part of the “the re-foundation of the Bolivian state” based on leftist and anti-colonialist ideas. The new enemy of Bolivia were not the drug traffickers or a concrete external enemy but “social lnjustice”, “racism”, and “poverty”. Foreign companies and foreign entities are enemies because they “loot our national resources”. Morales even created with the support of the ALBA the anti-imperialist school where mandatory courses were given to officers willing to be promoted. This training includes courses aimed at indoctrinating the military against the imperialist enemy, namely the United States. The Iranian Defense Minister Ahmad Vahidi attended the inauguration and delivered a speech along with Venezuelan and Nicaraguan representatives. Military relations between Iran and Bolivia have strengthened. Morales publicly expressed his interest in having Iranians training Bolivians. Bolivia expressed interest in acquiring drones and other military technology from Iran. It is reasonable to assume that Iranians have already been involved in the training or education of the Bolivian military.

However, when popular protests erupted in Venezuela, the military remained on the side of the government while the Bolivian military learning from the Venezuelan experience understood that standing with Morales would be highly costly in terms of human lives and social turmoil and that it could prompt a civil war.

The Venezuelan military’s cowardice extended the agony of the Venezuelan people. When some Venezuelan officers decided to rebel, they were already under heavy Cuban-surveillance and frightened by the monstrous Maduro regime. Maduro murdered a few military officers and incarcerated others.  Maduro resorted to para-military forces that included convicted criminals and murderers, foreign terrorist organizations such as the Colombian FARC and the ELN and others.

In Bolivia, it definitely wasn’t a coup d’état. The Morales government a was illegitimate in the first place and itself was attempted to become a military -supported regime and not a democratic one. The military decided to join the people.  The Bolivian situation is comparable to the desertion of key military figures in the Marcos regime in the Philippines in 1986 or to the Orange revolution in the Ukraine, in 2004 where a social uprising in light of electoral fraud ousted the government of president Viktor Yanukovych.

Morales’ departure is good news for Bolivia and for the region.  According to Human Rights Watch, 70% of Bolivian prisoners have not been convicted of any crime. Prisons are packed beyond their capability and prisoners underwent torture. Human rights activists are being constantly harassed.  A State Department report points out that  several Anti-government protestors were shot and killed. To be sure, the level of Bolivian repression, torture and murder is below Venezuela’s but is still worrisome.

New elections without Morales could restore constitutional rule to Bolivia. Bolivians have a lot to look forward to.